" Your visit and your question about my older mother, was unexpected to me" 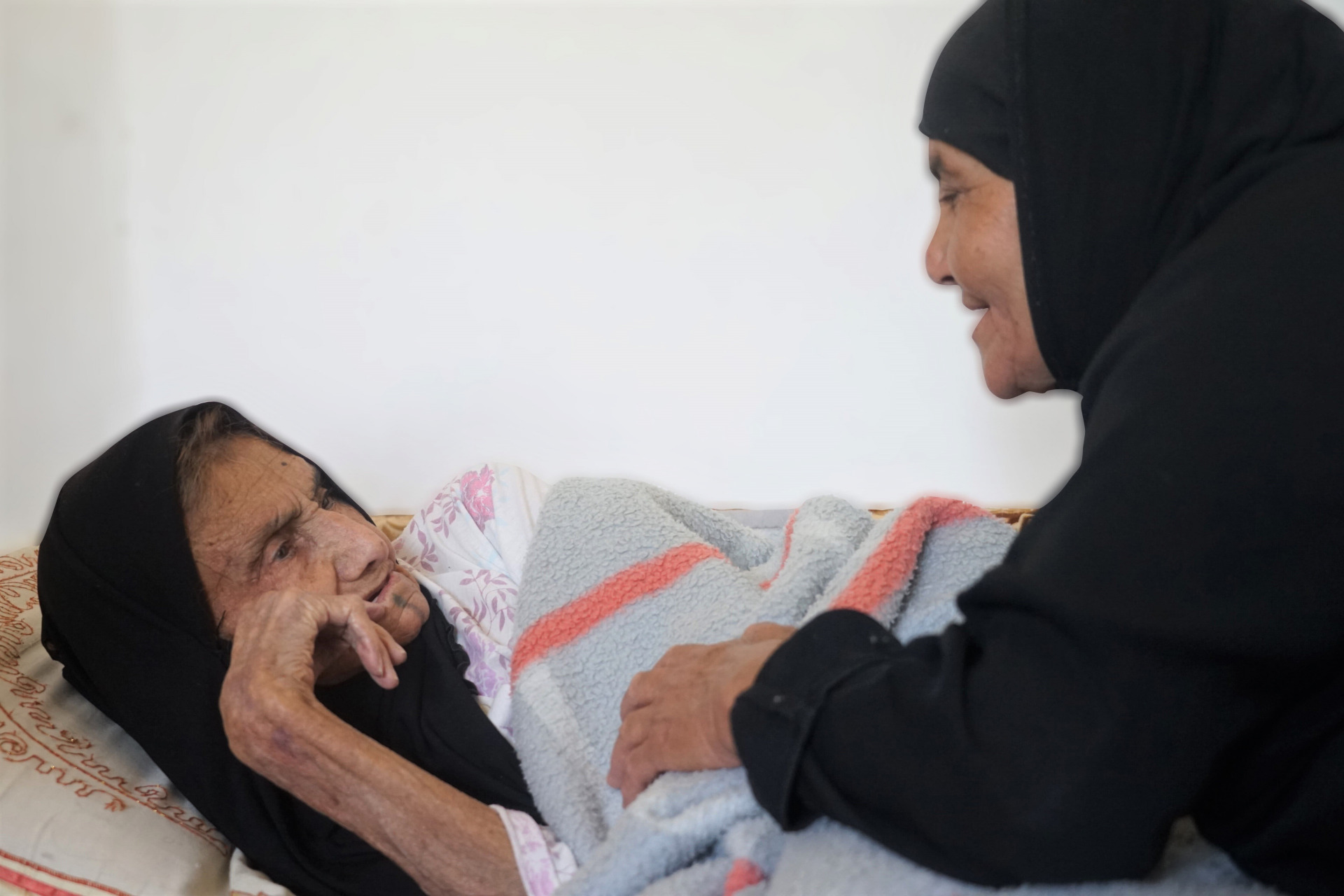 " Your visit and your question about my older mother, was unexpected to me"

Ms. Turfa Muhammed Elyan Al-Salaymeh, who is 110 years old, has 6 sons and 4 daughters, all are above the age of 60. She also has more than 120 grandchildren, and she is in good health overall and has not taken medicication throughout her life, but she suffers from some weakness due to old age.

Ms. Turfa lives with her 68-year-old daughter, Rahma who told us and that she and her mother compare the weekly educational messages they currently receive to what they hear about the virus from the local media. She added that theyare aware of many local societies working in the humanitarian field nearby, but none of them have ever taken care of or provided services for the elderly.

As for her son, Mr. Salem, 73 years old, as soon as the conversation started, his eyes were filled with tears, and he said that his mother Turfah is a generous woman who spent her life in the service of those around her, and that caring for her at such an age is a kind gratefulness and that what is presented through this project should be an example to follow by all local and non-local institutions and they should make the older persons  part of their plans, even if their programs are not specifically intended for the older.

Mrs. Rahma proceeded with her conversations, looking at her mother and smiling, saying that it was her mother who requested that communication be made with her children because she, like all mothers, has a kind heart and did not want to be a sole benefiter, but rather wanted to include her children as well.  She continued to look at her mother, smiling and spontaneously repeating all preventive measures against the Coronavirus, "We must wash our hands well and continuously, and we will keep the social distancing". She concluded saying “Stay Home” as a sign she has understood what she was briefed on.

Mr. Ali, her 80-year-old son, indicated that the benefits of this project and the continuous communication with his mother and siblings reminds him greatly of the interdependence and social solidarity that existed in the previous generations, and that the older people are still the focus of attention of the local community and the children, but unfortunately, there are some cases of older people who do not have anyone to take care of them, and here comes the role and importance of institutions and entities and honestly speaking "your visit and you’re asking about my mother and your interest in her in particular was an unusual thing for me" and I mean with my words that there are many humane societies and institutions in the region, but none of them had previously undertaken such an initiative,  “raising awareness among the older persons is very important because it reflects on them positively and this reflects on the awareness process in their societies because they convey these pieces of advice to their children and grandchildren and those around them of the local community.”